My Diagnosis Story, Part II: Wading Through the Symptoms

This is Part II of IV. The previous installment can be found here.

Everyone’s diagnosis story is different, just as each person’s disease (Crohn’s or otherwise) manifests itself differently. As such, everyone’s symptom onset is unique. It’s probably not unusual, then, that you can’t pinpoint a specific day you “got sick.” Rather, you can narrow it down to a span of time when you started to feel as though something wasn’t right.


My time span begins in the second half of 2003. My husband, Chris, and I had been married for just over a year, I had recently taken a new job, and I was to start graduate school in a matter of weeks. I considered myself quite healthy – not just medically, but physically. I ate well, exercised, didn’t smoke, and was at a healthy weight.


One day early on in this journey does stand out in memory, though - I had rotisserie chicken from the company cafeteria for lunch, and after that, I felt awful. I don’t remember the date, other than it was late summer, nor do I actually consider this Crohn’s related – it was probably just bad chicken and the proximity to other symptoms appearing was a coincidence. However, this is the first time I remember having had such an adverse reaction to food, and it wouldn't be long after that this would become a common occurrence.


In the second part of that year, I began having confusing and embarrassing symptoms – including hemorrhoids and a fissure. Yep, I just typed all that out there for the whole Internet to see! To hell with modesty - my embarrassment issues are cured!


My poor bottom - it was uncomfortable, irritated, and I was bewildered. Who on earth was I going to talk to about this? You can’t exactly bring it up over drinks with girlfriends: “So, my butt hurts and bleeds lately. How’s yours?”  I kept my discomfort to myself, and finally consulted my Primary Doctor. Cue the inspection of orifices I never in a million years I imagined happened in the world, let alone to ME.


I was eventually referred to a colorectal surgeon in the spring of 2004. This was the first time, frankly, that I learned this profession existed. Little did I know I would eventually keep a contact for this specialty in my address book.


At my first appointment with the surgeon, I felt totally out of my element and nervous. This was similar, I suppose, to a first visit to a gynecologist (or for men, a prostate exam) – you are going to have very private areas inspected, and you feel vulnerable and are unsure of what to expect.


The nurse had me disrobe from the waist down and lay down on a table with a disposable sheet covering my lower half. When the doctor came in, after a discussion about my symptoms, he had me lay on my side, facing the wall opposite him and the nurse. With gloved hands, he gently spread my butt cheeks to examine my fissure. I was facing the opposite direction, but can only imagine this looked something like someone pulling apart the buns of a giant sandwich to peer inside and see what kind it was. OH, THE HUMANITY! Couldn't they sedate me for this?

The surgeon confirmed that yes, I did indeed have a fissure, assured me that this was quite common, and told me that a simple outpatient surgery would resolve the issue. He tried to reassure me by explaining that he recently treated a local professional basketball player, and this patient was on the court by the weekend. Easy Peasy!


The doctor and nurse and been very professional and understanding, yet when I left the office I felt an odd mixture of relief and having been violated, thanks to my examination.

A few weeks later I had the surgery, and I will just say that OH MY GOD the pain from my first bathroom experience! It was awful (I cried out in pain), and no, I did not feel like playing basketball that weekend. Recovery didn’t happen as quickly as I’d hoped, but overall, it wasn’t terrible. I was back to work after a few days.

Mere weeks after my surgery, I came down with a serious bout of diarrhea (ewwww!). It was almost as if my GI tract had made a deal with my ass to make my bowel movements easy to pass and allow for healing. The duration of this new symptom had also became painful, however. Remember Harry's fiasco after unwittingly ingesting laxatives in the movie "Dumb and Dumber?" My experience was not quite so dramatic, but yes, something like that...for weeks on end. Maximum doses of Imodium hardly slowed it down. After more trips and calls to the doctor, gagging over a "sample" collection for the lab, and a course of antibiotics, it was barely improving. 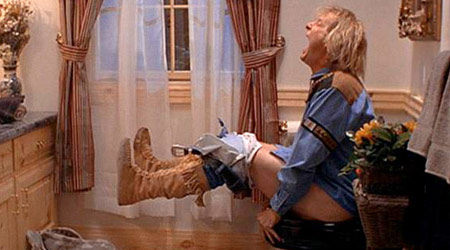 Things started to slow and resolve after I went on a clear liquid diet for a few days, followed by a progression to a "soft" diet. The Nurse Practitioner at my clinic prescribed something to help reduce the acid in my stomach, which did help with my discomfort. Finally, blessedly, it stopped. Angels sang! I was "better." I was diagnosed with Irritable Bowel Syndrome (IBS) and given a prescription for anti-anxiety medication, being told it would likely help my symptoms.

Pain and the Search for More Answers
For awhile, I did feel better. But by the fall of 2004, I started to have acute flare ups, during which I would be doubled over in pain for much of the night, which left me feeling depleted and weak the next day (for some reason, they usually occurred at night). Why I didn't visit a doctor again after I had a few of these, I do not know. Fear? Denial? Often, by the light of the morning, I figured it was over, trivialized it, and decided it would be difficult to explain after the fact. Besides, I had IBS, right? Or perhaps this was an ulcer? I told myself that I would just ask my doctor at my next visit.  I even suffered through one painful flare at a hotel in after a friend's wedding. I think I was so eager to “feel good” and live our vacation to its fullest that I overindulged on food and libations. The unfortunate result was having to spend much of the night curled up on the floor of the bathroom, vomiting and in pain. My poor husband - this was how we spent the Saturday night of our vacation, and I know he felt helpless.


At work, my productivity was declining. I was exhausted all the time, had trouble concentrating, and I didn't know what to make of it. How could I discuss what was going on? I couldn't explain it to myself, let alone my employer. I know it was frustrating for them, too. How many times can you say, "I'm not feeling well" before it sounds like an empty excuse?  And on the outside - I didn't look sick.

My school work suffered as well, but I continued with graduate school, determined to finish on the schedule I'd planned. Soon, not only did I feel rotten physically, but I also started to feel bad about myself. What was wrong with me? I was having trouble completing tasks I knew I could do and began to feel like a failure. My self-esteem plummeted, and I felt weak; powerless.

By spring 2005, my abdomen was tender and hurt most of the time. I was anemic, had pain after most meals, and had sores appear in my mouth from time to time. I would wear pants that were too big, or unfasten them after meals because it hurt for them to press on my tender belly. I still assumed it was IBS, and was operating in somewhat of a fog, often blaming my busy schedule.

In late March - Easter Sunday, to be exact -  I had a very severe flare, causing cramping, pain, and vomiting. This time, I knew I couldn't ride it out at home, and at nearly 11 p.m. my husband and I headed for the hospital.

At the Emergency Room, my symptoms were eased with an IV for hydration, Zofran (a wonder drug!) for nausea, and pain meds. Sweet relief! A Barium X-Ray was ordered to look at my gut and rule out appendicitis. It was a long night with a lot of waiting: waiting for doctors; for my stomach to be empty; for the barium to make it's way through my system; waiting for radiology.

The ER was under construction at this time, so patients were on gurneys separated by curtains. In the wee hours of the night, I overheard a discussion at the next bed between a patient and his physician, about his Crohn's disease. I remember thinking, "Wow, that must really suck." Not 30 minutes later, a doctor appeared at my side, having just read the results of my X-ray. She wanted to know if I had ever heard of Crohn's disease? Based on the inflammation they saw in my small intestine (specifically, the terminal ileum), this was a possibility, and they would be calling a gastroenterologist in on my case to consult.

I was admitted to the hospital, where I remained for 4 days, in which I also received and abdominal CT and was treated for my mystery illness (my discharge was delayed a day after I spiked a nasty fever).  The plan was to first rule out food poisoning, then treat the inflammation as an infection. I was to complete a course of antibiotics, then get a follow-up CT once the antibiotics were gone to see if the inflammation in my ileum had cleared. If not, we would go from there.


On the way home, apparently still in denial and hungry, I had my husband stop at a drive thru so I could pick up some french fries. After 4 days of hospital food, I was craving them (genius, right?).


Things were pretty quiet in the weeks after my discharge from the hospital, and I was a bit alarmed at my experience. However, I was also relieved and hopeful. Maybe I just had a horrible infection and this was it - we treated it and I would be done!

I had my follow-up abdominal CT a few weeks later, and about a week after that, I called the Nurse Practitioner at my clinic to check on the results. My second CT showed no change to the inflammation (which was actually scar tissue), indicating terminal Ileitis (Crohn’s Disease) was likely. I was given this news over the phone, and was then mailed a fact sheet about Ulcerative Colitis.

My new journey was underway.

5/7/13: Updated to include links to the other installments of my story, and to correct my follow-up test from a Barium X-Ray to an abdominal CT.
Posted by Heidi at 11:43 AM

Email ThisBlogThis!Share to TwitterShare to FacebookShare to Pinterest
Labels: Crohn's, My story